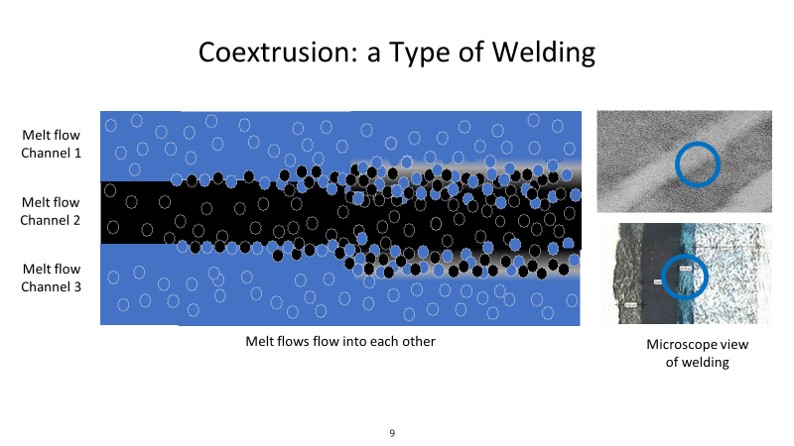 Figure 1: Coextrusion: a type of welding 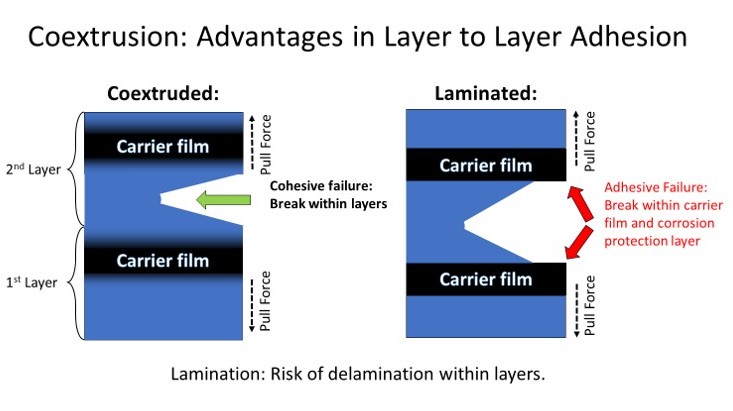 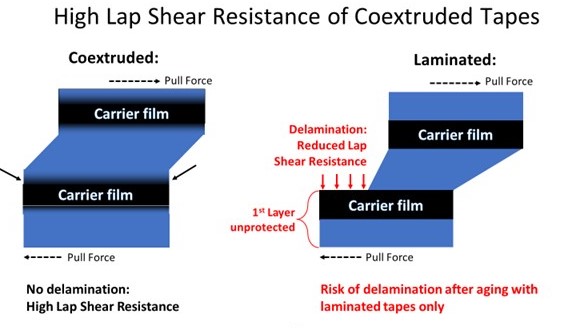 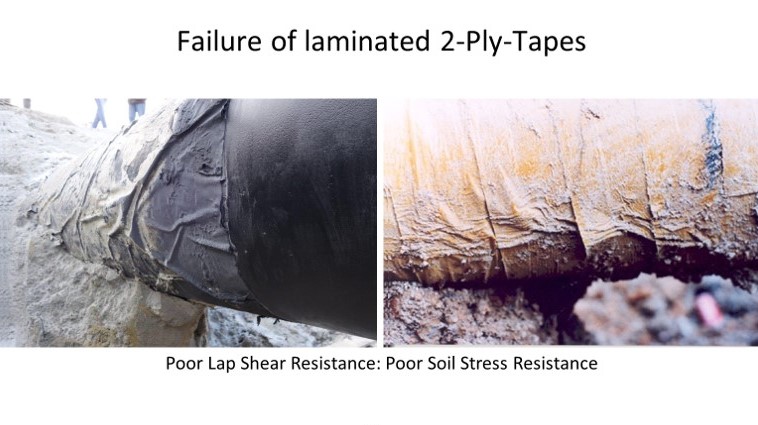 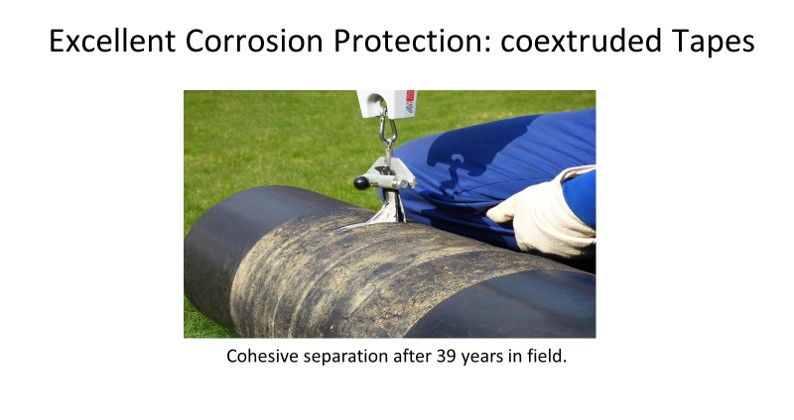 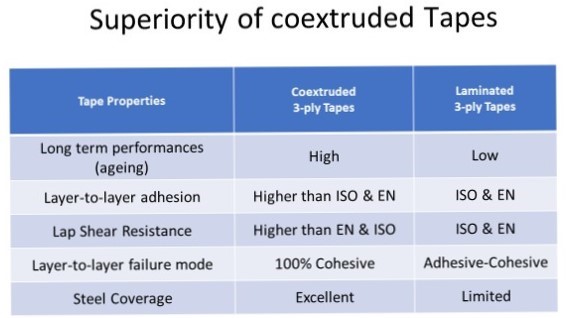 Which production technology wins-out in the long-term? Steel pipelines are capital-intensive, so their service life is critical. DEKOTEC GmbH impressively demonstrates the vital role that superior production technology plays in the operating life of a pipeline with the exceptionally long life of its three-ply corrosion protection tapes: even after 40 years in the field, the coating with a coextruded tape system still far exceeds the current corrosion protection requirements.

But why do some tapes protect the pipe better than others over long periods? What influence does the production technology have on the material properties and how does this change the quality of corrosion protection tapes? The following comparison of the lamination and coextrusion manufacturing procedures provides the answers.

To prevent a corrosive medium from gaining access to the steel surface, steel pipelines are protected against corrosion by a coating. Special corrosion protection tapes are used for the construction of new and rehabilitation of existing pipelines. These tapes consist of at least two layers, while high-quality tapes even have three different layers, which satisfy the required properties and functions.

In a three-ply tape, the middle layer gives the tape high mechanical strength and durability; it is called the carrier layer. The inner layer in contact with the pipe establishes a secure connection to the pipe surface and is called the corrosion protection layer. The outside layer, combined with the corrosion protection layer, ensures the interlinking of the spiral-wound tapes (link layer). The wound tape creates a closed tube, as the outer layer of the bottom tape fuses with the inner layer of the overlapping tape. This is something that two-ply tapes cannot do.

But even comparisons between three-ply tapes lead to significant differences that are not apparent to the human eye: so tape is not just tape. A key distinguishing feature is the production technology, which has a significant effect on the long-term behaviour of the tape system.

The different layers of the tapes consist of different materials that are interlinked by lamination or coextrusion during the production process. The one thing that all lamination technologies have in common is that at least one layer has already cooled before it its covered by another layer: a material is applied to a cold, solidified carrier film, which adheres to the carrier material similar to gluing. The different layers create a bond but are still separate from one another.

Coextrusion: a type of welding

It’s a different story in coextrusion: in this case, different materials are present in molten form during the joining and bonding process. In the coextrusion process, the different melt flows flow into a multi-layer die via different channels. What makes this so special is that along the flow path, the individual melt flows – and therefore the macromolecules of the molten materials – increasingly combined with each other and mix to the extent that they penetrate into each other (Figure 1). At the end of the process you get a single material line that consists of several layers. The bond established between the materials is now so strong that the strength of the material line can be compared to welding. The carrier and coating material form an inseparable unit. As a result, the film cannot separate into its individual functional layers, as is sometimes the case with laminated tapes.

Coextrusion requires expertise and a great deal of experience: every melt flow must flow at the same speed across the entire width to ensure a constant and correct thickness distribution of the material.

A simple test can be used to determine whether you are dealing with a laminated or coextruded tape: after immersing the tapes in petrol for at least two hours, the remains of the corrosion protection layer of a laminated tape can easily be mechanically removed; the carrier film is smooth or shiny. By contrast, the remains of coextruded tape are difficult to remove, even with the aid of heavy-duty mechanical tools.

During installation and subsequent operation of the pipelines, the coating does not just need to withstand mechanical attacks caused by movements of the pipe and traffic loads, it also needs to offer reliable protection under extremely diverse climatic conditions. High-quality corrosion protection tapes therefore need to have excellent bonding between layers, a high lap shear strength and a high elongation at break. Taking a closer look at these material requirements shows clear differences between laminated and coextruded tapes.

In long-term use in particular, there is the risk that the carrier film will detach from the corrosion protection layer of laminated tapes, as the layers are merely “glued” to one another. The individual layers then delaminate at this kind of predetermined breaking point (adhesive separation pattern). A coextruded tape does not fail: the macromolecules flow into each other, the individual layers penetrate into each other and create a bond (Figure 2).

As a result, the bond between layers is outstanding. A coextruded tape will not detach at the interface between the carrier material and corrosion protection layer even under extreme tensile force. Instead, a fracture would occur within the layers (cohesive separation pattern). The bonding of the link layer to the carrier film could also represent a weak point, if it were not coextruded to this layer to establish a permanent bond.

Lap shear strength and elongation at break as success criteria

As the installed pipeline is subject to temperature fluctuations, it expands and contracts. The pipeline moves relative to the surrounding soil: this creates lap shear stress.

Coextruded tapes can withstand this stress: the individual layers do not slide over one another because the macromolecules between the individual layers are mixed and interlocked during the manufacturing process. By contrast, laminated tapes risk delamination as they only provide a “glued” bond (Figure 3). The ageing process accelerates this with a significant influence on the long-term properties. The lack of lap shear strength of laminated tapes leads to weak resistance to soil stresses – with far-reaching consequences for corrosion protection: the tapes no longer cover the entire steel surface; the protection is no longer diffusion resistant and allows corrosive media to reach the steel surface.

In addition to excellent lap shear strength, high elongation at break is another quality feature of coextruded tapes – and an indication of the use of high-quality materials and an optimal extrusion process: as opposed to lower-quality tapes, high-quality coextruded tapes can stretch much further before they tear (Figure 4).

“A direct comparison of the material properties shows that there are considerable differences in corrosion protection tapes. Coextruded tapes have a significantly higher long-term durability and are superior to laminated tapes”, explains Dr Reha Cetinkaya, Director Engineering DEKOTEC GmbH. “These days, pipelines have a life of at least 50 years, ideally up to 100 years. The use of high-quality tapes is essential to ensure corrosion protection over this very long timeframe.”

DEKOTEC GmbH impressively showed the superior durability of coextruded tapes in practice using the tried-and-tested BUTYLEN tape: in 2015, a modern logistics centre was built in Bavaria – precisely where the ISARSCHIENE high-pressure natural gas pipeline was installed in 1976. As part of the necessary re-routing of the gas line, the operator Energienetze Bayern GmbH excavated the 39-year-old pipes: a unique opportunity to check the durability and quality of the BUTYLEN tapes that had been used at the time. Two coextruded three-ply tapes with a polyethylene carrier material with a butyl rubber coating on both sides had been used. A spiral-shaped winding of the three-ply tapes around the pipe allowed the butyl layers to fuse together in the overlapping areas. They formed a homogeneous, tube-like coating and were inseparably bonded to each other.

The analysis of the pipe section, which had been in continuous operation for 39 years, showed very impressive results: the pipe had no corrosion damage in the areas protected by the tape. The butyl rubber corrosion protection layer remained securely affixed to the steel, providing full protection for the pipe.

Laboratory analyses of excavated weld seam no. 584 with a pipe diameter of DN 300 were particularly revealing. Although the pipeline is located in Germany’s grain-producing region, where ground vibrations are to be expected due to heavy tractors and harvesting machinery, the coating of the high-pressure pipeline showed no defects, even after four decades of use. The weld seam of the steel pipe remained protected against corrosion by the BUTYLEN three-ply tape.

Quality that pays off.

Even after 39 years in use, coextruded tapes still meet the current standard requirements for corrosion protection coatings. They continue to provide outstanding corrosion protection just as they have from the very first day, impressively demonstrating their long-term durability. The unique production technology has a positive impact on the material properties and performance. The outstanding bonding between layers and high lap shear strength of coextruded tapes permanently protect the pipeline. They are not susceptible to delamination or slipping apart of the layers due to pipeline movements (Table 1).

As a result, coextruded tapes are far superior to laminated tapes and have a much better long-term durability. “As has been proven and recognised in many areas, the use of high-quality materials and products in pipeline construction makes a big difference to value preservation and long-term operation. Using the right corrosion protection products from the start will generate immense cost savings in the years to come. These are costs that would become necessary if the pipeline had to be repaired due to low-quality corrosion protection”, concludes Max Wedekind, Managing Director DEKOTEC GmbH

You can find more information on dekotec.com.