20 years of DEKOTEC GmbH: From Leverkusen to the world

From 0 to 100 in just two decades: Since starting business in 2002, DEKOTEC GmbH has developed numerous markets worldwide. Whether in Australia, Southeast Asia, the Middle East, or in Southern Africa: DEKOTEC stands for quality Made in Germany.

DEKOTEC GmbH is active in other sales countries than its sister companies. So behind the name DEKOTEC stand identical products in proven quality, manufactured in Germany, but with a different brand name. How did this decision come about?

With the worldwide first invention of the Petrolatum-Tape ("Schade´s plastic protective tape") almost 100 years ago, the mother company of DEKOTEC GmbH laid the foundation for its success. Due to trade restrictions after World War I, German products could only be marketed by granting licenses to third parties in certain export countries, including the United Kingdom, for example. There the then business partner – on behalf and in the name of the German company – registered rights to the trademark in the country.

After World War II, however, these trademark rights were then attributed to the local licensee. Since then, there have thus been two companies that use the same (word) trademark in the same industry, but are completely independent of each other. As a result, the parent company of DEKOTEC GmbH was unable to sell its well-known products under the same brand name in all countries of the world. 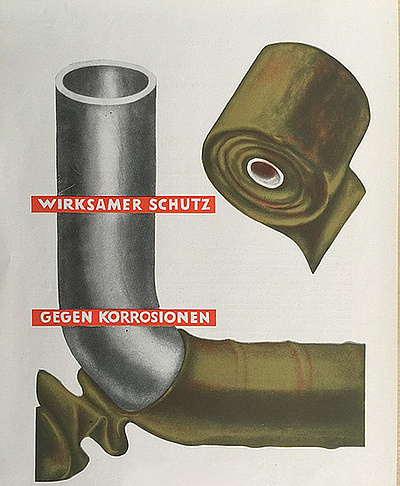 Print ad for the famous Petrolatum-Tape (1927)

In the course of the growing internationalisation of its business activities, a solution was found to deal with the issue around the legal rights to the trademark of the mother company: Founding DEKOTEC GmbH (the name is the abbreviation of the first two letters of the mother company and the German words for corrosion protection technology) covering all those markets where the founding company did not have the right to use its well-known initial trademark. A challenge that DEKOTEC GmbH, as a relatively young company, has mastered very successfully in just 20 years.

"Down Under" makes a start

In 2002 DEKOTEC GmbH also successfully completed the first projects in Australia. Managed from Leverkusen/Germany and supported by local sales partners, initially heat shrinkable sleeves were predominantly used – as they continued to be in subsequent large-scale projects in Iraq (2004-2008). 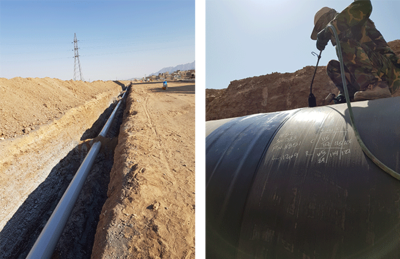 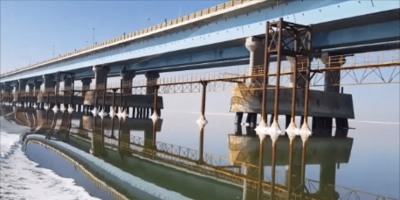 Gradual expansion of the product portfolio

Both in the Middle East and in Australia, DEKOTEC GmbH expanded its range of products in the following years to include PE/butyl tapes and new areas of application. The BUTYLEN 3-ply tape provided reliable protection when building a new 81-km energy supply pipeline for a lithium mine in the Pilbara region of Western Australia, for example.

In Iran, the pier protection system MarineProtect™ was successfully applied on 372 pillars under the only bridge over Lake Urmia, the largest inland lake in Iran.

From a project solution to successful system

The 2012 renovation of the gas pipeline from Temane (Mozambique) to Secunda (South Africa) was an important project for DEKOTEC GmbH to win. Particularly as it also succeeded in renovating the pipeline during operation. This involved using a newly composed system for the first time, combining a thick 3-ply tape for corrosion prevention as the inner layer, BUTYLEN-AS50, and a robust 2-ply tape for mechanical protection as the outer layer, BUTYLEN-R20 HT.

Application training on the Temane-Secunda pipeline in South Africa, 2012

As a result of its excellent impact resistance, this project-specific solution developed into a frequently used, internationally established system. 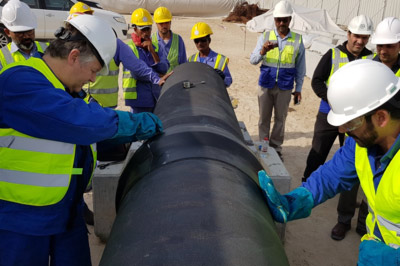 New requirements in the energy sector

In the future, a reliable fresh water supply will play a critical role, not only in the Middle East. When building the main water supply for Zayed City in the United Arab Emirates in 2019, DEKOTEC GmbH successfully demonstrated its experience for those kind of projects. The 32-km long water pipeline supplies the headquarters of the central government institutions based in the south of Abu Dhabi. Here DEKOTEC® heat shrinkable sleeves were used.

True to our motto "We don't just sell products, we create solutions", DEKOTEC GmbH has proved that flexibility and reliability are crucial to its success. In countries with challenging external conditions, custom solutions and technical consulting are critical: Although at first heat shrinkable sleeves defined the product portfolio for selected countries, DEKOTEC GmbH very quickly expanded its range to encompass the entire product portfolio of the company group and convinced customers with the famous Made in Germany quality. Some 2,500 orders have been successfully completed over the past 20 years. 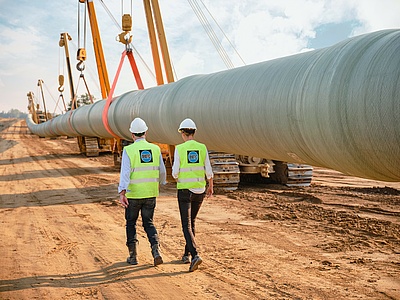 DEKOTEC GmbH – positioned for the future

Today DEKOTEC GmbH delivers to 45 countries worldwide. The growing international requirements for environmental and industrial protection play a central role in its self-image. And in the future its adaptability will be even more in demand: in addition to new construction and rehabilitation of oil and gas pipelines, water supply and wind energy are gaining strong in importance.