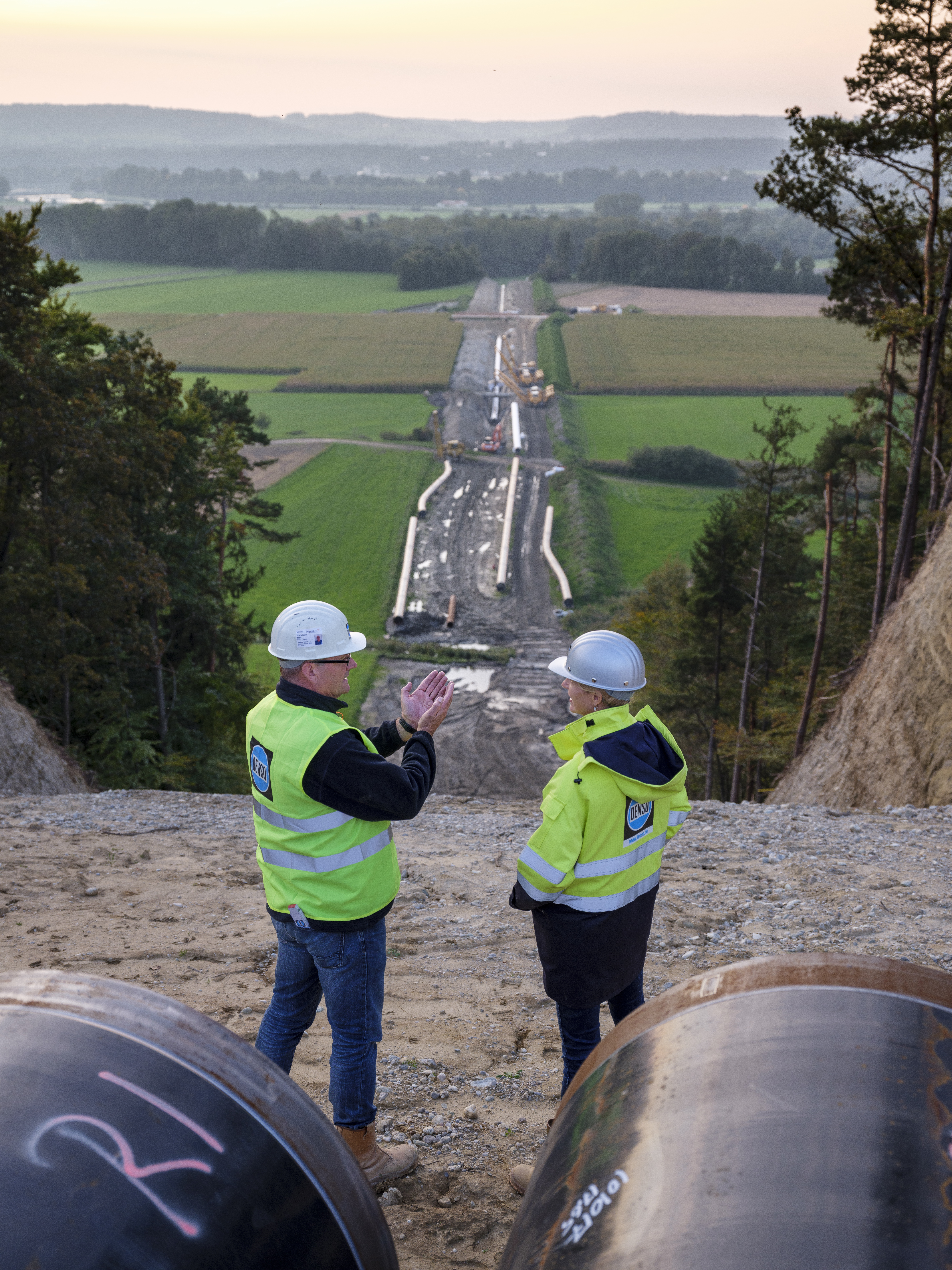 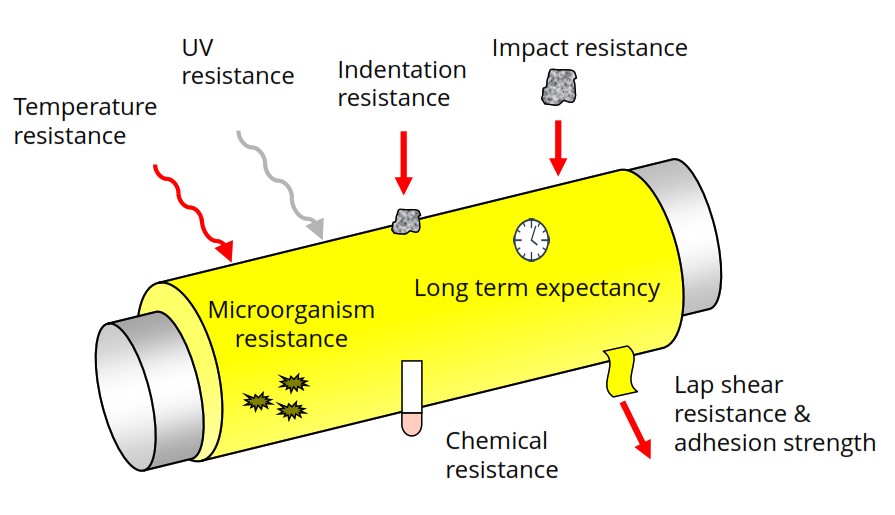 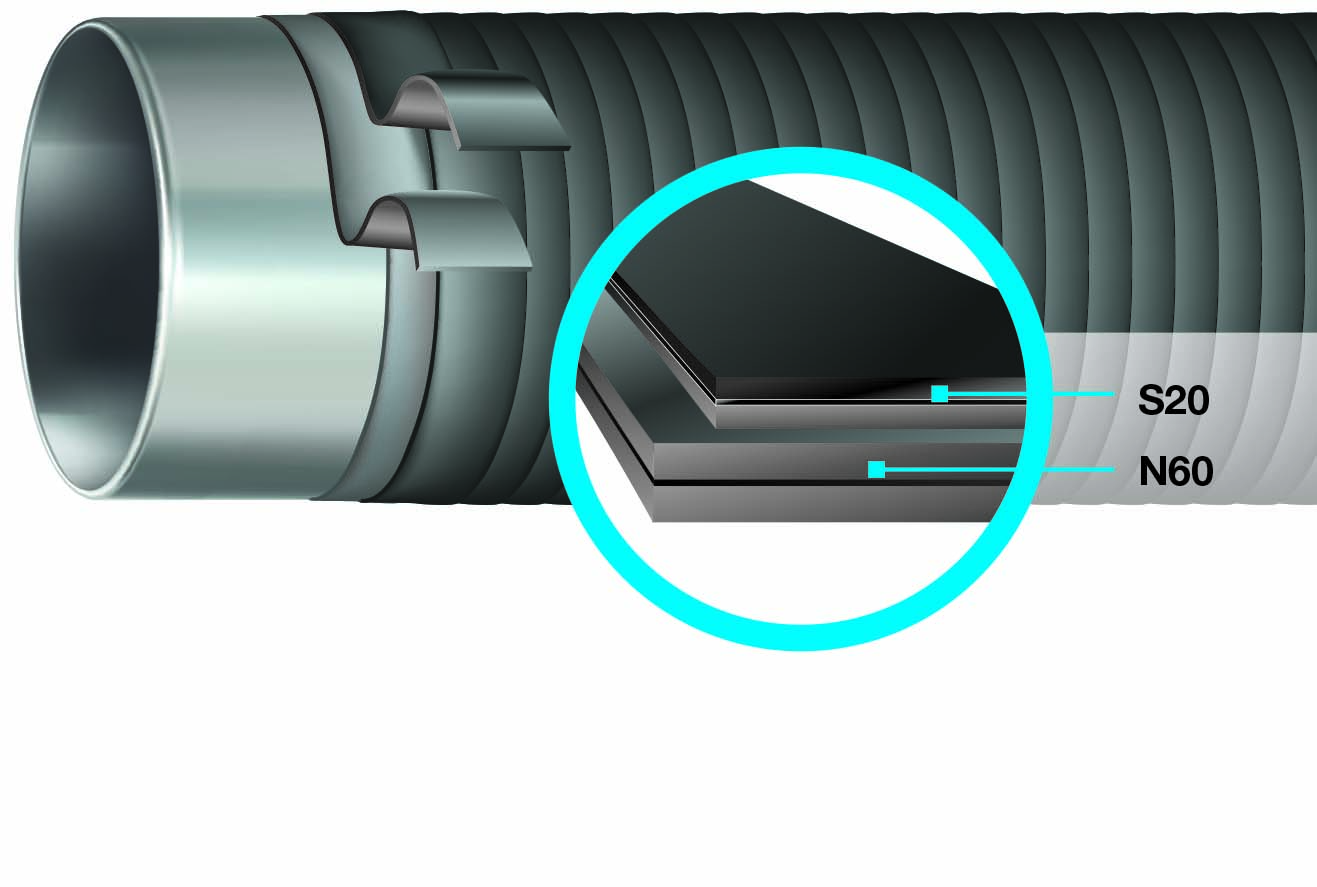 System structure of the BUTYLEN-N60/-S20

These are the key data of the MONACO transmission pipeline in Upper Bavaria in Germany. The new construction of the high-pressure natural gas line is an important milestone for security of supply in the region. DEKOTEC GmbH and the group of companies are the leading manufacturer of corrosion prevention tapes. With its BUTYLEN tapes and its technically sophisticated DEKOMAT® wrapping machines, it ensures an extremely efficient construction process for the coating of weld seams.

DENYS, a construction company responsible for building a section of approx. 40 kilometres, awarded 100% of the contract to DEKOTEC. Peter Westphal, Project Manager at DENYS, explained the long-standing cooperation with DEKOTEC as follows: "We have come to appreciate the company very much. The quality and reliability of the products, as well as the support before and during the project are deciding factors for us.”

The BUTYLEN-N60/-S20 tape system, an extremely high-performance corrosion prevention system for consistently high operating temperatures, is being used for this project. It has already been put to use in large projects such as the OPAL and NEL pipelines.

As with every other construction site, the challenges on the MONACO pipeline are very specific and unique. Unlike with a factory coating, where the steel pipes are coated with a protective system under ideal production conditions, during field-joint coating highly dynamic, sometimes very difficult external factors need to be taken into account on the construction site itself. Important factors during installation are characteristics specific to the respective climate, soil and terrain. In contrast, for operation of the pipeline itself, protection against corrosive media and the pipeline’s resistance to mechanical stresses such as transport and pipe movements are particularly important.

Field-joint coating involves numerous challenges: In addition to easy and safe processing, one of the most important decision-making criteria is a proven long term resistance to ageing over decades of operation. Because, as a “first line of defence”, the passive corrosion prevention stops the corrosive medium from reaching the steel surface. There must be compliance with demonstrable resistances in terms of peel and tensile shear strength, as well as reliable dent, impact and tear resistance (Fig. 1). The cathodic protective current only intervenes as a “second line of defence” in the unlikely event of impaired passive corrosion prevention.

The varying terrain along the supposedly short building section of the MONACO pipeline, which measures approx. 40 kilometres, presents an enormous task. A number of rivers, train lines, road crossings and – as a particular challenge – a steep slope with a gradient of 50% need to be conquered. People, materials and machines must be able to meet very stringent requirements when welding the tubes and subsequently insulating the weld seams on the slope.

For this building section, the BUTYLEN two-tape system is used, which has proven itself over decades. The cold-processed system for corrosion prevention on metal tubes consists of two co-extruded three-ply tapes that are applied as an inner and outer tape-layeron the pipeline (Fig. 2).

The structure of these three-ply self-amalgamating tapes consists of one carrier film made of stabilised polyethylene, which is coated on both sides with a butyl-rubber layer. This carrier film is manufactured in a special co-extrusion process in which a single inseparable unit is created from carrier material and coating material. As a result, the film cannot separate into its individual functional layers, as is sometimes the case with laminated tapes.

A spiral-shaped wrapping with 50% overlap of the three-ply tapes around the pipe allows the butyl adhesive layers to amalgamate in the overlap areas. They form a homogeneous, hose-like coating and are inseparably connected to each other. In these areas the molecules of the butyl-rubber layers fuse together. This self-amalgamating-process is completed after only a short amount of time – five days at the most.

In contrast, two-ply tapes do not have a self-amalgamating effect – the PE carrier film has an adhesive coating on one side only. When two-ply tapes are used, in the event of adhesive fatigue and the subsequent entry of oxygen and moisture, a process known as delamination occurs, meaning that the corrosion-protection layer becomes detached from the steel surface. When tape overlaps are incompletely sealed, the use of two-ply tapes also results in severe damage, such as spiral corrosion.

The three-ply tape technology demonstrates great advantages compared to other corrosion prevention procedures (such as heat shrinkable sleeves, liquid coatings etc.). These corrosion-prevention tapes meet user and operator demand for simple, reliable and efficient processing extraordinarily well. They are cold-processed. An additional tool such as a flame for melting or applying the product or to pre-heat the steel pipe is not necessary. The pipe only needs to be brushed, and does not need to be grit-blasted. The tape can therefore also be applied while the pipeline is in use — a significant cost advantage for the operator. Application of the corrosion-protection tapes is so flexible that the tapes can be used in different nominal diameters on a single construction site. Pre-assembly coordinated to the pipe diameter ex-works is not necessary. Additional wrapping can also be applied quickly and easily to correct any imperfections or processing errors. 3-ply tape technology: One solution with many advantages.

Peter Westphal, DENYS, summarises this as follows: “The advantage of the BUTYLEN two-tape system is quite simply that it is a three-ply tape that is applied in two layers. Over time, the tapes amalgamate, creating long-lasting corrosion prevention.” The high-performance tape system used on the MONACO pipeline is a system that has been tested according to the leading standard EN 12068, stress class C50, and approved by the German Technical and Scientific Association for Gas and Water (DVGW). It is suitable for temperatures up to +70°C (+158°F) and compatible with all factory coatings made of PE, PP, FBE, P, CTE and bitumen.

In pipeline construction with very long line operating cycles in particular, practical confirmation is an ideal way to prove the theory. An opportunity for such confirmation arose in Germany in 2015. A modern logistics centre for an automobile manufacturer was built in exactly the same area as the ISARSCHIENE high-pressure natural gas line, which was first constructed in 1976, between Moosburg and Straubing in Bavaria. As part of the re-routing of the gas line that the new building required, the operator Energienetze Bayern GmbH excavated the 39-year old pipes.

This represented a unique opportunity to check the durability and quality of the BUTYLEN tape that had been used during the original construction. During development, all DEKOTEC products are subjected to a range of quality tests that simulate the long term ageing characteristics of the materials. The analysis of a tape from a line that had actually been in continuous use for 39 years revealed extremely interesting and precise results.

The first surprise for the team of experts came during the excavation work itself: The pipe was recovered from a tonne of soil. Current state-of-the-art technology requires laying the pipe on a sand bed. Nevertheless, in areas that were protected by the tape, the pipe showed no signs of corrosion damage. The butyl rubber layer remained securely affixed to the steel, providing full protection for the pipe.

Laboratory analyses of excavated weld seam no. 584 with a pipe diameter of DN 300 were particularly revealing. Although the pipeline is located in Germany’s grain-producing region, where ground vibrations are to be expected due to heavy tractors and harvesting machinery, the coating of the high-pressure pipeline showed no defects, even after four decades of use. The entire area of the steel pipe’s welded seam was still completely protected from corrosion by the BUTYLEN three-ply tape, although the tape was originally applied without roughening the steel surface, as is required now.

Back to the MONACO pipeline: On the customer side, the focus is on automation and efficiency. The petrol-fuelled or electric driven DEKOMAT®-11 wrapping machines guarantee a high level of application reliability, and automatically maintain a constant winding tension and overlap width. Three of these machines are used on the pipeline. Bert Bockstaele, Head of QSHE at the leading construction company DENYS, emphasises that using the equipment, the employee workload is significantly reduced. “The wrapping machines make us 50% faster and therefore more productive compared to manual wrapping. On one day we coated 53 weld seams,” Bert Bockstaele said.

The smaller, manual wrapping device DEKOMAT®-KGR Junior is light and extremely flexible. For this demanding project with steep slopes, train and river crossings as well as road crossings, it can be used in many different ways. Because of its lightness, the device is ideally suited for use in difficult-to-access terrain, such as on the steep Wanklbach slope, but also for the field-joint coating of short pipe elbows and for short nominal widths of DN 40, for example in station construction.

In the summer of 2018, after the pipeline was lowered and ground material was filled in, water-pressure tests were performed to verify that the weld seams were impermeable. The test showed perfect field-joint coating with BUTYLEN tape systems. Construction work is scheduled for completion in 2018. The pipeline should be commissioned in the same year. This will ensure that the region’s demand for natural gas is met in the future.